Response to a complaint about our two Vassar student guests

Thank you for listening to Activist Radio and for you exhaustive response to our recent interview of two student members of Vassar College's Jewish Voice for Peace.

You ask us to correct some "inaccuracies" in their interview statements. No one likes inaccuracies, but these students were there during Vassar's campaign for BDS, and you weren't. Your references to supposed antisemitic statements made by Dr. Jasbir K. Puar, Associate Professor of Women's & Gender Studies at Rutgers University, is a good example. Did you attend her lecture at Vassar two years ago? Or are your opinions based on some second hand account of what she was purported to say?

You might be interested in a letter about Dr. Paur that was sent to then President of Vassar College by over 500 scholars and educators.

"As scholars, educators, and and academicians engaged with political developments in Israel/Palestine and their effects in the United States, we are deeply concerned to learn that our esteemed colleague, Prof. Jasbir Puar of Rutgers University, has become the target of a rash of hate mail and other threats since delivering a talk at Vassar College earlier this month. These heinous and misinformed attacks are the direct result of the talk Prof. Puar presented at Vassar on Feb. 3, at the invitation of the American Studies Program and seven other academic programs and departments, including the Jewish Studies Program. We feel strongly, as we’re sure you’ll agree, that universities have a responsibility to provide invited speakers with a climate of security and safety, especially when their views are controversial. We also believe this responsibility to defend the free speech rights and integrity of invited guests continues even after they leave your campus, when they are subjected to vilification and hatred—as Prof. Puar has been, particularly in the ugly op-ed article in the Feb. 18 Wall Street Journal, which was also an attempt to smear Vassar College."

Sadly, you are still repeating this vilification of Dr. Paur in your criticism of my two student guests. I don't find your other "inaccuracies" in their interview any more creditable.

Moreover, I think your letter confirms a finding by the Center for Constitutional Rights, that “a network of lobbying groups, watchdog groups, public relations entities, and advocacy groups funded by, working in coordination with, and/or staunchly supportive of the policies and practices of the Israeli government primarily drives efforts to silence speech on behalf of Palestinian rights.”

A free and open society must resist such attempts to smear and slander advocates of human rights. 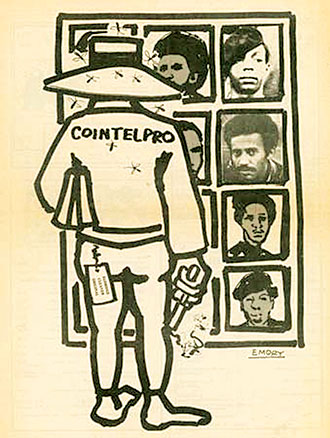 Guest: Ursula Wolfe-Rocca, teacher from Lake Oswego, Oregon and author of several articles including “COINTELPRO: Teaching the FBI’s War on the Black Freedom Movement” and "My So-Called Public School: School Foundations and the Myth of Funding Equity," talks about her latest piece in Common Dreams called: "Disguising Imperialism: How Textbooks Get the Cold War Wrong and Dupe Students."
I was very enthusiastic about this interview. Here is the heart of one of our country's most shameful problems, the fact that we teach the propaganda of imperialism. Whether it is the Pledge of Allegiance said at the beginning of each day, or the Star Spangled Banner played at each school event, our children are indoctrinated at an early age.

Nothing they subsequently learn in middle or high school questions the basic lesson that America is exceptionally strong and just. The teaching of history is particularly important. Students are taught that any moral failures of our country have long since been corrected. Slavery is gone so that problem is solved. The Mexican American War maybe wasn't right, but it helped our mighty country achieved its manifest destiny. And so it goes. Our democracy always corrects itself after; that's just the beauty of our Constitution and our system of government.

Once a student graduates from high school, the rest is a slow process of discovery. The more one reads US history the less benign it seems. Cointelpro is a good example. The FBI actually has a long history of suppressing free speech. Sometimes that suppression has included assassinating Black or Native American leaders or charging them with crimes they didn't commit. Cointelpro is a good example of the FBI acting like the SS. And the CIA? Little more than an American death squad with unlimited resources, boundless confidence, and an institutionally stunted moral compass.

So how does a high school teacher reconcile these two worlds? By teaching facts it seems. That gives a teacher like Ursula Wolfe-Rocca some protection. The one area that has remained difficult is teaching about Israel. Of course, Israel is the closest to fascism that our society has come with its unlimited racism, endemic corruption, and unbridled militarism. Israel represents one direction that the American Empire could go in. Let us hope for the world's children that our country eventually rejects the Israeli model.

Progressive except for Palestine 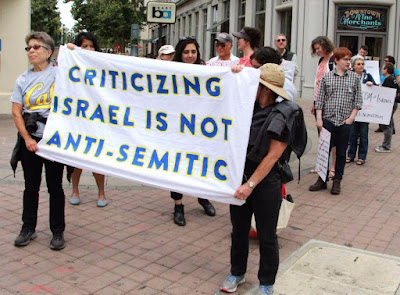 GUESTS: Ally and Paul, political activists and members of Jewish Voice for Peace at Vassar College, talk about Israeli Apartheid Week Apr 13 - 20 and the challenges of running a human rights organization on campus.

I decided to us just use first names after talking about what students at various colleges have gone through as members of organizations like Jewish Voice for Peace and Students for Justice in Palestine.

The Zionist and their henchmen have been particularly vicious on our nation's college campuses. Imagine if Shell Oil had put up posters around Vassar College charging students working for renewable energy with terrorism? Or created websites so these same students might find it hard getting a job after college? The Israel Lobby is on another level altogether. As one congressional aid said about the lobby when we met with him about Palestinian rights, "They scare me."

The Zionists just don't have another point of view. They support a fascist and racist state, and must believe to some extent in Israeli tactics. Those tactics include shooting unarmed protesters as we have seen all this last week.

And is it the fear of losing donations that makes colleges allow such assaults on intellectual freedom on their campuses? Instead of defending their students, many colleges have simply betrayed them, throwing Palestinian support groups off campus and even expelling some of their members. Someday, this history of collusion will be written. It will be a shameful chapter, especially for colleges that have presented themselves as bastions of liberal thought. Progressive except for Palestine.

GUEST: Patrick Martin, long time social justice activist and senior writer on US politics for the World Socialist Web Site, talks about why so many Democratic candidates for the House have backgrounds in the CIA, the military, and the national security state.

The National Security Stare wins big with the Democratic Party. Trying to get away from any Bernie reforms at all, the establishment Dems embrace CIA, NSA, and military candidates for Congress. How could a political party really be any worse than this?

Obama ran from any real reforms while claiming he represented "Hope you can believe in." Could anyone still believe in the Democratic Party, after Bill and Hillary Clinton, and then Obama? Maybe a few wealthy neoliberals. But not the working class of this country. They would have elected Mickey Mouse before watching another sellout pretending to do the peoples' business.

Patrick Martin has done his homework, and his interview was filled with details of the Democratic sellout to the security state. It is interesting, of course, but ultimately sad as well. We are led by malicious and venal people, ever eager to sell out their principals for a few million here and there. The proof is beyond any doubt. If we want to save the planet, we will have to trash the current system of kleptocratic, two party rule.