Gracious with her time 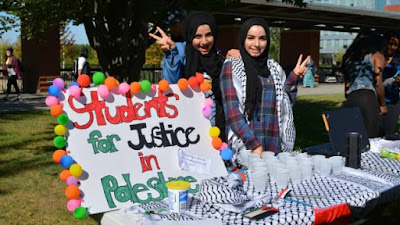 GUEST: Aliya, college student and a leader of Students for Justice in Palestine at Bard College, talks about the challenges of advocating for Palestinian human rights on campus.

I had done this interview at Bard College right after a Students for Justice in Palestine event. Aliya was gracious with her time (she was taking the two filmmakers out to dinner that night). She was also gracious with her college and her country.

Aliya holds a fervent belief that the human rights of the Palestinians will eventually be upheld. To advocate for the rights of millions being ethnically cleansed from their homeland is simply the right thing to do. Her college will see that, as will her country.

I am not as sure. The colonialism and racism of our current system of government has been with us for a long time. Israel is part of our occupation on the Middle East. Billions depend on it. The oil companies and weapons makers will never sacrifice their profits to do the right thing.

Maybe that is the difference in our ages. Aliya is in her first year of college. I thought the world was changing in the 1960's. Now I see that such changes may not come in my lifetime. But what we do share is a determination to continue the struggle for human rights, believing like MLK that the arc of all life on earth bends toward justice.

Racist actors in the drama of apartheid 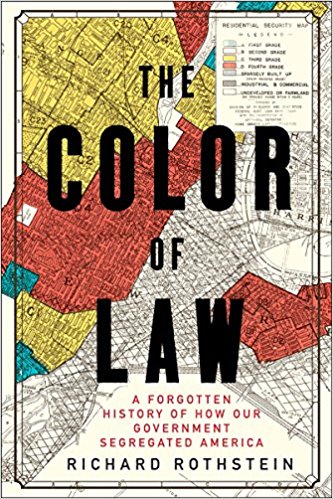 GUEST: Richard Rothstein, research associate of the Economic Policy Institute and a fellow of the Thurgood Marshall Institute of the NAACP Legal Defense Fund, talks about his recently released book, The Color of Law: A Forgotten History of How Our Government Segregated America.

Richard Rothstein's book, like James Loewen's Sundown Towns changes the narrative about racism in the United States. Segregation, according to Sundown Towns was mostly done through organized intimidation and violence. Richard Rothstein expands the list of racist actors in the drama of apartheid to include the federal, state and local governments.

It is a compelling read, history that white people just don't know about. It calls out for a remedy, a legal way to restore our Constitutional rights after decades of racial oppression and injustice.

I think it is amazing the progress the left has made in revealing the structural basis for segregation in our country. All this at the same time as the right wing is stirring up racial hatreds to win elections again.

We have gone back to the income distribution of the Gilded Age. Who would have thought that we would also be reverting to the blatant racial hostility towards Blacks that characterized the 1890's. It is time for us to march together again for racial justice. 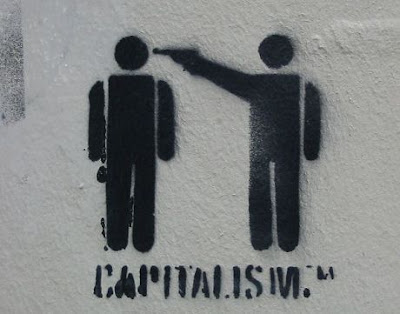 GUEST: Michael Roberts, London economist, Marxist, and author, talks about the global financial system and his most recent book (written with Guiglelmo Carchedi), The World in Crisis, a compilation of international economists' views on profit and the recurrent crises in global capitalism. Michael Roberts will be a presenter at this year's Left Forum in New York.

Few economists step back and consider the human effects of the policy they study. Marxists do that, so they have become valuable especially in this time of crisis.

But isn't every age a time of crisis? We have certainly seen our share of crises since the Second World War. But only recently have we fully realized that a mistake in policy could be the end of our species. Nuclear war and global warming may not be the most interesting of crises, but both have the potential to be humankind's last.

Capitalism has become sort of a state religion over the years. Attacking capitalism is like attacking God. It gets you nowhere except investigated by the thought police. But what if capitalism is the problem? What if neoliberalism is the "spiritual death” that MLK warned us about? And what developed country in the world spends a greater amount on "military defense" and a smaller amount on "programs of social uplift"?

A continuation of our species relies now on those who are, in MLK's terms, "the creatively maladjusted." Not on the super rich. Not on the intellectuals who fashion their analysis for money or position (think Paul Krugman coming out for Hillary Clinton). We have to listen to divergent voices to still have a chance. 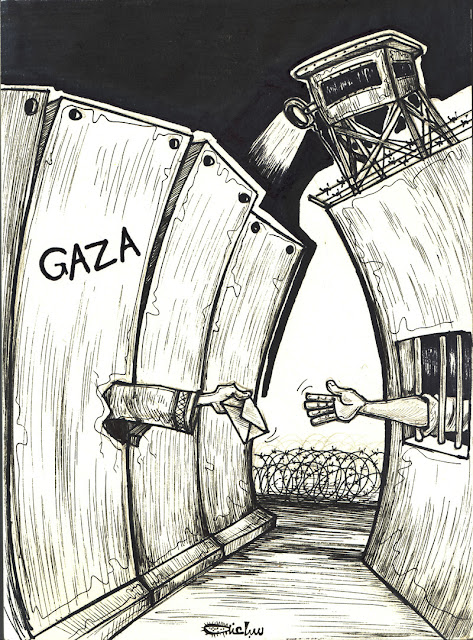 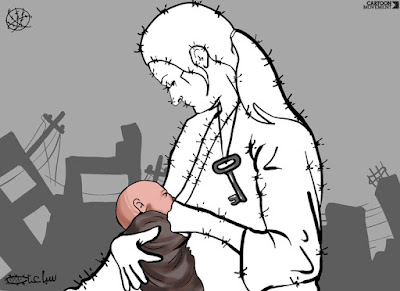 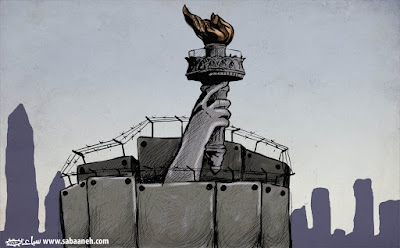 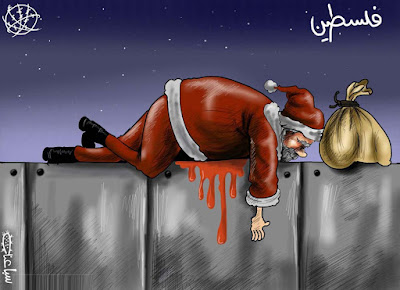 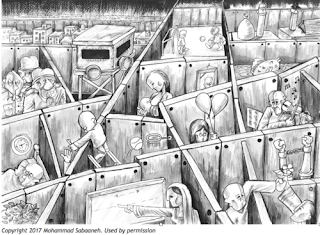 Guest: Mohammad Sabaaneh, a Palestinian graphic artist living in Ramallah who is the principal political cartoonist for Al-Hayat Al-Jadida, talks about his powerful new book "White and Black: Political Cartoons from Palestine," to be released by Just World Books in early May.

Mohammad got the idea for this book while suffering in an Israeli jail. He also spent time in solitary confinement, which is perhaps the subject of the cartoon on the left.

No charges were ever filed against Mohammad, a very common fact of life in apartheid Israel. Laws differ according to one's religion. Human rights are rarely respected and due process doesn't exist if you are a Palestinian. A huge number of young Palestinians have been imprisoned, much like the statistics one finds on Black incarceration in the US.

In fact, the more one learns about the historical treatment of African Americans in this country, the more dramatic the similarities become. Richard Rothstein's new book "The Color of Law" will come out in a few days, and it proves beyond any doubt that America's federal, state, and local governments actively pursued racial segregation over the last 100 years, along with the banks, real estate firms, insurance companies and even much of corporate manufacturing. Yes, America's treatment of Blacks has created a caste system, the same as has been done by Israel in occupied Palestine.