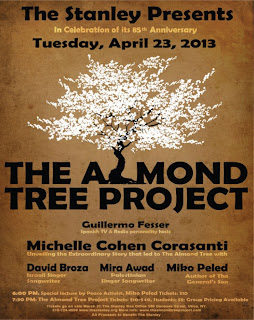 GUEST: Guillermo Fesser, a radio host whose news program is broadcast in Spain, talks about his efforts in America to publicize a new book on Palestine, The Almond Tree.

It was a pleasure having Guillermo on Activist Radio. I wish I knew enough Spanish to understand his long running radio show broadcast in Spain. Politics with a touch of humor. We never got around to asking him about Harry Shearer, one of America's most biting humorists. Or about the Daily Show, where most people in their twenties get their news. The US media is so full of lies that humorists get to say much more than journalists.

I hope we can get the writer, Michelle Cohen Corasanti, as a guest later on in the year. The book is a powerful look at the lives of Palestinians, something that the average American is never exposed to by our media. How do we know our media is controlled by our government? Look at the US reporting of Palestine for the last 60 years. Then read some foreign press. That's all anyone has to do to understand the sham we call freedom of the press in the US.

Closer than we think? 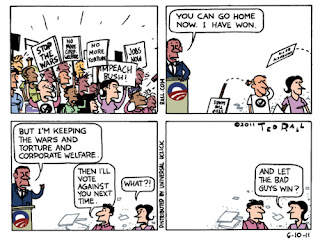 GUEST: John Stauber, political activist who founded the Center for Media and Democracy and co-authored six books about propaganda, talks about his recent article in Counterpunch entitled: "The Progressive Movement is a PR Front for Rich Democrats."

John's political analysis is very close to mine. When the Nation Magazine supported the Democrats in 2000, I finally wrote them off as part of the problem and not part of the solution. The group "MoveOn" was an easier decision. They wouldn't do a survey of New York State MoveOn members on what "antiwar" candidate they wanted to back for Senate. MoveOn wanted Hillary, of course, and refused to do a poll until two days before the primary. Like the Working Families Party, MoveOn is transparent (or are all these astroturf groups that way after you take closer look?)

What is the nature of our political life? How best to bring change to our system so mired in corporate influence? Maybe it is to question the legitimacy of the system. When enough of the population question the basic fairness of their form of government, you get an Arab Spring. I think many countries in Europe are much closer to this than we think. Now to apply what we have learned at home, in the belly of the beast.

The face of evil

GUEST: Felice Gelman, local human rights activist, talks about her recent experiences in the Middle East, including her ride on the Freedom Bus tour of the West Bank.

This was a very moving interview to do. I had been with Felice on the Gaza Freedom March, and we had participated in a demonstration in Tahrir Square. About 400 of us blocked traffic in both directions to protest the Egyptian government's decision not to let us into Gaza.

OK, you can watch our demonstration at http://www.youtube.com/watch?v=reoGHwKmhV8

Felice has continued to put herself on the line for Palestinian human rights, and for simple justice. Her retelling of some of the Freedom Rider stories really brought home the brutality of racism. Especially moving was the account of the actors as they portrayed  the escape of Palestinian children threatened by teargas asphyxiation. The mothers had to throw their children from the second floor to those waiting below. How important art is in helping us connect with other people's suffering. Without connecting, we can live our lives paying for Israeli apartheid. We can sleep at night while horrible things are done.

If you have ever wondered about the face of evil, it is you, asleep at night while your country supports such inhumanity.