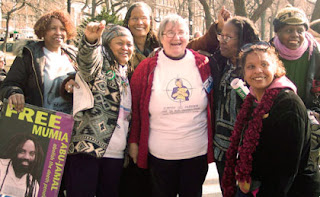 GUEST: Ralph Paynter, husband of Lynne Stewart, one of America's most important political prisoners, talks about the efforts to get medical treatment for his wife and about her ordeal at the hands of the US criminal justice system.

You want the system to be better than it is. Lynne's conviction was a travesty, and a payback for all those years that she defended Black Panthers, Muslims, radicals, and others that the elites always want to throw in jail and shut up.

The system is also vindictive, and hardly interested in due process or a defendant's rights for a fair trial. Lynne's treatment by our criminal justice system show how little legitimacy it has left. It is not run by people who believe in justice at all. The police, the courts, and the prison system are forms of oppression, warnings to those who would advocate for the powerless.

The last decade has been particularly damaging to the image of America as a country ruled by law. There were the massive war crimes committed in our invasions of other countries. There was the constant erosion of civil liberties and the rights to privacy. And finally, this lawyer sleeps at night chained to her bed in a small cell, while being denied medical treatment that might save her life.

These are the travesties we confront when a nation loses its way. In its protection of the rich and powerful against all forms of democratic expression, the machinery of force used to murder and torture abroad has come home to be part of our own lives.

Study Nazi Germany to understand fascism? Study the United States in the beginning of the 21st century. 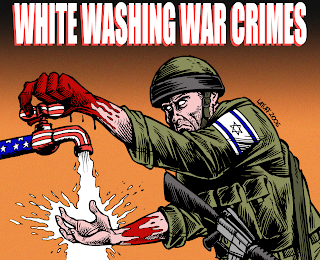 GUEST: Dr. Rashid Khalidi, Edward Said Professor of Modern Arab Studies at Columbia University and editor of the Journal of Palestine Studies, talks about his most recent book, "Brokers of Deceit: How the U.S. has Undermined Peace in the Middle East."

At what expense to our nation and ourselves do we whitewash Israel's crimes against humanity?

Part of the whitewash is pretending that the US is an honest broker in the Middle East, a myth our media repeats so often that it becomes part of the national consensus. But what if the US is merely buying more time for the construction of new settlements in occupied Palestine? What if our government never had any real goal of brokering a peace deal?

The same folks who brought you the wars in Vietnam, Iraq, and Afghanistan are telling us that our government has have honorable intentions towards the Palestinian people. Maybe the progressive movement should focus on this obvious lie, so similar to the other misrepresentations that the empire has foisted on the American people.

Justice for Lynne Stewart. It is the defenders of freedom of expression in our society who are paying the price for empire. Lynne was put into prison for defending an unpopular Muslim cleric. It was clearly a warning to the legal system that the "War on Terror" is to be a war on Constitution rights.

If we ever get these rights back, Lynne will be a hero. For now, she is part of the proud resistance to a nation that has lost its way within the world community. Lynne's jail sentence is part of that "spiritual death" that Rev. Martin Luther King predicted for a society that spends more on war than on uplifting its own citizens.

Here is Lynne's "Cry Out for International Women's Day:


This is a cry from deep in my soul on behalf of my sister - abused, forgotten, make marginal. We are always aware of our place on the rungs of the ladder of oppression based on race and class and sex.

Since this needs be brief, I want to first talk about sisters Indian - Asian and Native American. It is the most difficult concept to conceive of the evil predatory communities these women on different sides of the world live in. Rape is VIOLENCE not sex. It has been routine for men to absolutely do as they will without any fear of retribution legally. There have been no courts to prosecute, to PUNISH. My first rejoinder is always to ure sefl-defense - that will always get a woman to court. But she may be the vicim again. Right now, the Congress has passed a "law" that we hope will protect Native Indian women here. But there have been many "laws." There is greater hope in India where there has been a righteous female upsring that cannot be ignored.

Briefly, I just want to mention - women who are no in the cruel workd but suffer behind bars - cages, if you will. Some of us are political - here because the government has criminalized our actions or framed us - I call out to you to Remember an Cherish Marie Mason, a "green warrior," Afra Siddique, a "heroine in her won Pakistan for her brave resistance," and also Me - Still fighting, Still Strggling. Still loving you all.


Support Lynne now, especially when she is being denied in her request to see a cancer specialist in NYC.

Working for democracy in the streets 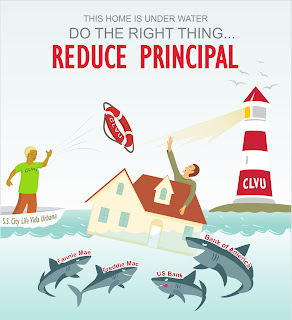 Taling to Steve was like taking a quick course in grassroots revolution. The process of challenging greedy banks and landlords is so well thought out, so well tested and evaluated that it makes me wonder what local progressive groups in the Hudson Valley have been doing all this time.

Steve could have been a CEO of any major bank or real estate development firm. But he took a course in community organizing at MIT in the early 1970s and soon dropped out to test the ideas he had learned.

What is so interesting, I think, is that Steve's brand of community organizing gets right down to the basic questions we need ask of our society. Is everything measured by its dollar value? Do people have any basic rights apart from how much money they have?

These aren't questions a capitalistic society wants to bring up, especially the elites who demand that every human right be subjugated to their rule of law. By buying up all our elected representatives, the elites have written the laws just the way they want them. The rich are given unlimited rights to plunder the poor and the working class.

There is another way, and City Life shows us how to work for democracy in the streets. 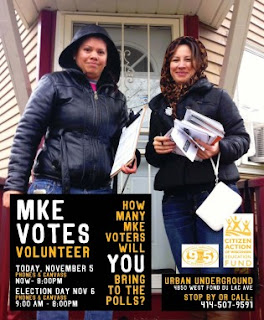 Kat was convincing and certainly had a lot of organizing on her plate. She was originally going to do the show in person, but had too much work. Gary and I, who have rarely had that problem, but would never miss doing a show.

I never got around to my most pressing questions about Citizen Action. No doubt the organization advocates for good things, like workers' rights, increased minimum wage, and getting out the vote for progressive candidates.

So what's wrong with that? Can't a group working for good also work for a political party? Or to put it another way, why wouldn't the Democratic Party fund a group that always talked left, as long as they delivered the votes on election day?

I saw this at Occupy Poughkeepsie. An older man came with what he told us was a "great idea." He wanted the group to canvas half the city, to "see who really supports social change." Occupy could certainly use this support, and the lists would be handy for major actions.

"Anyone else get the names?" someone asked.

Only the Working Families Party. And that, he maintained, was a plus too. All the names would be typed on lists to make them easier to use. I think a few did collect names. But Occupy, for all its lack of sophistication, had little time for organizations trying to gather votes for Obama. Move On was even less respected and often hid their identity when they attended major Occupy rallies.

Citizen Action used to be different, but got sucked up in Bill Clinton's sleaze machine early in his presidency. So is Citizen Action the change we can believe in? I guess if you still believe in Obama, you might give the group a try. 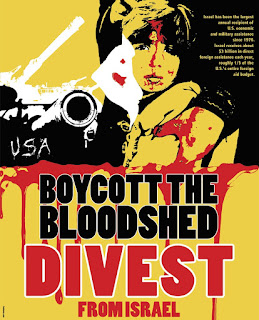 The hardest step seems to be the very first one you take. There are Muslim support groups in all our major colleges. They have potential allies in the community as well as in Jewish peace groups to back them up. Why don't  these campus organizations start talking about using boycott, divestment and sanctions to call attention to the Israeli occupation of the West Bank and Gaza?

Sabreen takes us through the beginning steps of seeing what companies are in a college's investment portfolio that profit by Israeli's illegal settlements. From there, it becomes an educational campaign to gather support from other progressive student organizations. A BDS campaign is a process, but the first act is always the most difficult.

Muslim support groups on campus have often taken the opposite approach. If only they can keep their heads down, maybe they won't be attacked. They make allies, but only by pretending that Palestine is not really such an important issue. They simply mimic the oppressor.

But freedom can't be won that way. It is only through resistance that Muslims in America can attain their rights in a deeply racist and Islamophobic society. Students at UC Irvine show us that it can be done.